skip to main | skip to sidebar

Explanation of point number 2.
The blood coagulation sub-system is different with respect to other systems because:
a.      An individual would not realize, or find out from repeated experiences that one such system is needed until an accident causing bleeding occurred.
b.      Such an accident would be always fatal, leaving no time for genetic adaptation.
How do we know that such an accident would always be fatal?
Hemophilia type A is a congenital disorder where people have lower levels of the clotting Factor VIII (Factor VIII deficiency). Hemophilia type B, a more serious form of the disorder, is the deficiency of Factor IX. Without treatment, the blood clotting process in people with hemophilia, especially type B, is slowed down.
In severe hemophiliacs even a minor injury can result in blood loss lasting days or weeks, or even never healing completely. In areas such as the brain or inside joints, this can be fatal or permanently debilitating.
Medical researchers tell us that before hemophilia could be medically treated it was fatal in people and that the average hemophiliac would not reach the age of maturity.
As we mentioned, hemophilia is the deficiency of one factor in the coagulation cascade examined under point 1, but not necessarily the lack of a Factor.
In our hypothetical case however, we are talking about the lack of all coagulation factors, the lack of all coagulation mechanisms, in fact the lack of the whole coagulation system. Thus there is no reason to believe that an internal or external beading in an individual without a coagulation system could stop for some undetermined reason, preventing the individual’s immediate death.
Point number 1 examined earlier, among other things, excludes the possibility that an individual could be born “by chance” with a functioning blood circulation sub-system. Thus if we exclude an intelligent process of generation, any and all species must have existed without a blood coagulation sub-system. Let’s take a healthy blood circulating individual without a blood coagulation sub-system: If this individual happens to grow to maturity and reproduce literally without a scratch, it will generate progenies without a blood coagulation sub-system. This is because no process of adaptation will initiate, as there is no “need” for a blood coagulation sub-system. Assuming otherwise would mean that genetic adaptations could be started without necessity, i.e.: “by chance”, thus falling within the category of random mutations, which have already been dismissed.
If instead the individual happens to start bleeding, then the adaptation process has to occur within the few minutes the individual is still alive, before it loses too much blood and dies. To be able to successfully procreate, our bleeding and dying individual would have to be a male, as its progeny could only be conceived and brought to gestation by a surviving female individual of the same species. However, because of the complexity shown in point 1, including the requirement for the presence of fully developed mechanisms to prevent exactly this event (a loss of too much blood), a genetic adaptation happening within minutes is also physically impossible.
For example, assuming that the process of genetic change is not random, but directed by some kind of “program”, then our bleeding individual, already under stress and in the process of dying within minutes, would have to:
-         develop all the specifics of a complete blood coagulation sub-system (without much help from its own genetic code, which never had such a system). There is no theory postulating that this can be accomplished at all, without involving random mutations. If one theory could be conceived, then even with an intelligent plan, all the right chemical and biologic elements, and within a favorable environment, this process (creating such plan using biological elements, not pen and paper or a computer) would involve chemical reactions and biological changes which would require more than a few minutes, then
-         from the specific plan of the coagulation system, the individual would have to develop the genetic information (amino-acid sequences) needed in the DNA describing the coagulation system as part of the DNA of its species’ genes, so that this individual’s progeny could develop a coagulation system at birth. This process would requires more than minutes, because of the slow speed of sequencing amino-acids and replicating DNA, then
-         transmit this new genetic information in its entirety to its own already existing sperm (no known process has been discovered or proposed that can do that) or discard all of the existing sperms and develop new ones to replace the old, processes that are conceivable, but could not physically be completed within a few minutes, because they involve physical movement and growth or replication of biological matter within the individual’s body, then
-         meet and attract a female partner, and then
-         successfully reproduce!
From the above reasoning and example, it seems obvious that any conceivable biological process initiated by an individual a few minutes before death would not have time to become part of that species’ genetic information.

After demonstrating both Point 1. and Point 2. we can say that the blood coagulation sub-system of any blood circulating animal species could neither have been generated through genetic mutations nor through genetic adaptation.
If this is true, then evolutionary scientists will have to come up with some other hypothesis not only to explain the generation of relatively complex biological processes, but also for the formulation of their description in the genetic code.


An overview of the coagulation sub-system
We are not able to describe here the physiology of the coagulation sub-system in detail. We include only a simplified view of it, as we understand it, just to have an idea of its complexity, as it relates to the number of variables involved.
Coagulation begins almost instantly after an injury has damaged the endothelium lining of a blood vessel.
In all mammals, coagulation involves three mechanisms:
1.                  Vascular spasm: The smooth muscle in blood vessel walls contracts immediately where the blood vessel is broken. This response reduces blood loss for some time, while the other two mechanisms become active.
2.                  Platelet plug formation:  When blood platelets encounter a damaged blood vessel they form a "platelet plug" to help to close the gap in the broken blood vessel. This is the beginning of the process of the blood "breaking down" from is usual liquid form in such a way that its constituents play their own parts in processes to minimise blood loss.  The key stages of this process are called platelet adhesion, platelet release reaction, and platelet aggregation.
3.                  Blood clotting, a mechanism involving proteins (many coagulation factors).
Blood clotting must happen at a precise level: If blood clots too quickly or too easily, then thrombosis may occur. This is blood clotting in an unbroken blood vessel, which is dangerous and can lead to strokes or heart-attacks. Conversely, if the blood takes too long to clot, then hemorrhage may occur. In this case much blood may be lost from the blood vessels, which is also dangerous. The hereditary disorder haemophilia is a condition in which certain coagulation factors are missing from the blood, as a result of which the blood cannot form clots (without medical intervention).
Blood clotting happens in three stages:
a.                  Formation of Prothrombinase, which happens in two ways (see below);
b.                  Prothrombin is converted into the enzyme Thrombin: Prothrombinase (formed in stage one) converts prothrombin, which is a plasma protein that is formed in the liver, into the enzyme thrombin.
c.                  Fibrinogen is converted into Fibrin: In turn, thrombin converts fibrinogen (which is also a plasma protein synthesized in the liver) into fibrin. Fibrin is insoluble and forms the threads that bind the clot.
The formation of Prothrombinase happens in two ways:
a1.       An intrinsic pathway: This is initiated by liquid blood making contact with a foreign surface, i.e. something that is not part of the body; or
a2.       An extrinsic pathway: This is initiated by liquid blood making contact with damaged tissue.
These pathways follow a pattern called “coagulation cascade”, and include a common pathway, as represented in the diagram below: 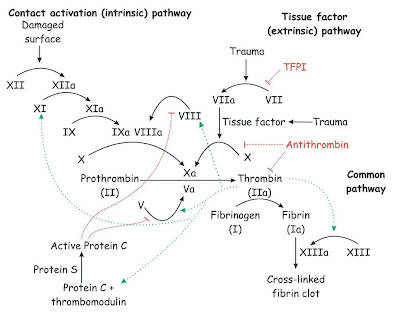 Diagram 1: The Factors involved in the coagulation cascade.

In addition to the above factors and inhibitors, the following co-factors and regulators participate in the coagulation cascade process:

Five regulators keep platelet activation and the coagulation cascade in check. Abnormalities can lead to an increased tendency toward thrombosis:

Eventually, blood clots are reorganised and reabsorbed by a process termed fibrinolysis. The main enzyme responsible for this process (plasmin) is regulated by various activators and inhibitors.

Fibrinolysis is a process that initiates at the time of the injury and prevents blood clots from growing and becoming problematic. It also has a delayed effect, which eventually is used to re-absorb and digest the blood clots. 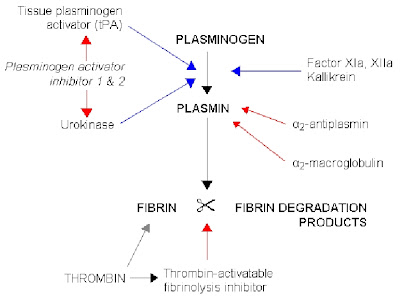 Diagram 2: Fibrinolysis (simplified). Blue arrows denote stimulation, and red arrows inhibition.
The following are some of the chemicals participating in the Fibrinolisys mechanism of the coagulation cascade process (in addition to those previously mentioned):
1.      tPA: Tissue plasminogen activator
2.      Urokinase
3.      Kallikrein
4.      a2-antiplasmin
5.      a2-macroglobulin

Giuseppe
Toronto, Ontario, Canada
Giuseppe has been in the computer communication and networking industry for many years. He is the CEO of Gorbyte Inc. at: Gorbyte.com For profile details, see: mrgori.com/profile.html